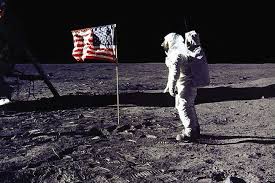 Thanks to my mother, I grew up resenting him for it. When I was a kid, If I were to ask my mother for something that was even mildly outside her imaginings she would respond with, “And the man on the moon wants ice water.”

Mom: And the man and the moon want ice water.

Me: Mom I want to take dance class.

Mom: And the man on the moon wants ice water.

…and you get the drill.

I would often wonder what the man on the moon’s thirst had to do with me. For sure my mother was doing her best and with eight kids to raise, my thirsty desires must have been as frustrating to her as trying to getting the guy on the moon a little H2O. Admittedly I can be needy.

The good news was that I also had a cockeyed optimist for a father. He was a believer in the impossible. My father once told me, “Maureen, I believe that if I buy a lottery ticket and I pray to God, that God could and would change the numbers on my lottery ticket to make me win.” I asked him, “Dad, if God is that able, why doesn’t God just drop a bag of cash at your door and cut out the middleman?” He leaned back in his chair with an amazed look on his face. “Oh, good question Maureen! Good, question.” Then after conferring with the ceiling for  an answer he returned his gaze to me with a pirate’s smile. “It must be that God likes to play games too.”

It was my dad who helped me believe and achieve my own impossible dreams. My father who told me early and often, “You can be whatever you want, just be good at it.” I had no idea what a valuable permission slip that was to be.

In third grade, when the question was posed, “What will you be when you grow up?” I stood and announced that I would be a movie star with a swimming pool and palm trees. Why not? I didn’t know it was like asking to walk on the moon until I heard snickers from the class. That’s when I realized that dreams were fragile and needed to be gently cared for and vehemently protected.

“That’s when I realized that dreams were fragile and needed to be gently cared for and vehemently protected.”

Recently I read a story about a man named Eugene Shoemaker who as it turns out is the actual man on the moon. Eugene was a dreamer and a doer. He was also a famous astronomer and geologist who made a huge contribution to space travel by inventing the scientific research of cosmic impacts, and as it turns out he created the techniques that Apollo astronauts used to research the Moon.

Shoemaker’s own dream was to be an astronaut but because of some health issue he was denied. Still, for the duration of his life he never gave up hope that he would one day get to the moon.

Because of this dedication to space travel as well as his devotion to his dream, something beautiful happened. When Eugene died in 1998, NASA decided to honor his life by sending his ashes to the Moon on the Lunar Prospector. To this day his ashes mingle with the moon dust.

Around the capsule that carried his ashes to the moon was wrapped a piece of brass foil inscribed with a passage from William Shakespeare’s, “Romeo and Juliet”:

And, when he shall die, Take him and cut him out in little stars, and he will make the face of heaven so fine That all the world will be in love with night, And pay no worship to the garish sun.

Without dreamers who reach for the moon, the world would be a very boring place indeed. So wish on your stars and devote yourself to your dreams. For any worthy dream is not yours alone, it is shared with the rest of us dreamers as inspiration of the achievement of the impossible.

Maureen Muldoon is a writer, speaker, storyteller and thought leader who helps you go from where you are to where you want to be in business, in love, and life. She blogs at www.communitysanctuary.com. ~ MaureenMuldoon.com and VoiceBoxStoryNight.com